ANC provides tools to convert ANC standoff annotation files in GrAF to the Common Analysis Structure File (CAS) used by the Unstructured Information Management Architecture (UIMA), and to export annotations in UIMA CAS format to GrAF. The tools can be accessed through the UIMAUtils API or by running an executable jar file. Both methods are described in the following sections. Familiarity with UIMA and Java is assumed.

The UIMAUtils package contains classes to convert annoations in GrAF format to a CAS (UIMA Common Analysis System format). The class org.exces.graf.uima.example.Example shows how this can be done.

The following steps are required to create a CAS from GrAF annotations:

The following classes in the UimaUtils package perform the conversion:

Three base types are created:

The nodes of the graph passed to the createTypeSystem() method are iterated over and a type is created for each annotation encountered. Every new type is derived from the grafAnnotationType. The name of a type is controlled by an ILabelMaker object (using the DefaultAnnotationLabelMaker implementation). The label maker makes sure that type names conform to UIMA specifications (type and feature names cannot contain special characters other than underscore). It records changed names within an altered-type-name-map (an org.xces.graf.util.NameMap object). This map can be written to disk in XML format.

Next, the features encountered in an annotation are added to the corresponding new type. Feature names are derived from the annotation and feature structure names within which they are nested. Feature names are post-processed to conform to UIMA specifications. A feature whose name is changed is recorded within an altered-feature-name-map (an org.xces.graf.util.NameMap object). This map can be written to disk in XML format.

A feature called "children" of type grafListType is added to a type corresponding to an annotation that annotates a node with children in the graph. The type system factory also creates the FsIndexDescription array as it generates the type system. Every feature (including those inherited) within a type is added as a key to its index. After a type system has been generated, the index array can be retrieved with a call to getIndices().

Types corresponding to annotations are assigned priority in one of two ways:

This class performs step 4 of the conversion, by creating a CAS given a graph, a UIMA type system, and an index description. Once the type system has been created for a graph, the actual annotations within it must be instantiated as UIMA feature structures (for the CAS). The feature values must also be set.

The org.xces.graf.util.Flattener is used to set the "user object" of every node in the graph as a region. This region is used to store the 'begin' and 'end' anchors (offsets in the case of text) that the node spans. In the case of text, these are calculated from the offsets of the regions that the children of the node annotate. The 'begin' offset is the minimum of the 'begin' offsets among all children, and the 'end' offset is the maximum of the 'end' offsets among all children. For instance, if a graph consists of 3 nodes (annotations) -- a node "sentence" with children "noun" and "verb" -- with the children annotating regions 0 to 10 and 11 to 20 respectively, the 'begin' and 'end' for "sentence" will be calculated as 0 and 20 respectively. These values are then be used to set the values of the corresponding features for each annotation.

The nodes of the graph are iterated over and each annotation encountered is instantiated as a feature structure in the CAS. Feature values are also set. Further, the children, if any, of a node (annotation) are added as components in the "children" feature array.

The jar file can be run with the command:

The command line parameters are :

The standoff File types (all in GrAF) supported are :

To verify the conversion, use the UIMA Annotation Viewer (annotationviewer.bat) located in the UIMA distribution directory uimaj-distr\src\main\scripts. For complete documentation on the use of the tools and examples provided by UIMA please review UIMA documentation.

The annotation viewer will pop up the following window. Type in the input directory where the CAS files are located and the type system descriptor file, then click view:

In the next window double click a CAS file : 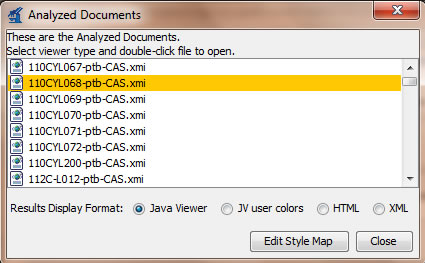 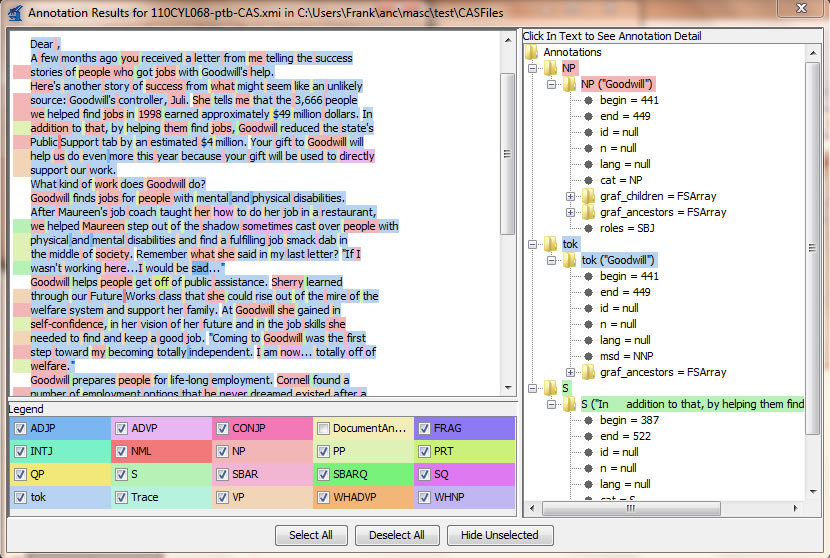